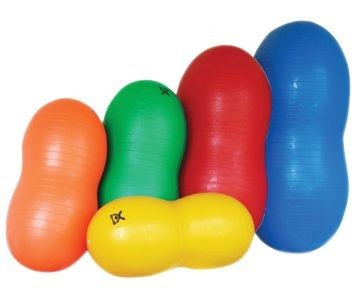 The peanut ball arrived on the birthing scene as a useful tool for aiding in maternal comfort and the progress of labour. However, just how and why this versatile device is used to achieve these ends is still a bit sketchy, so here’s an overview of the merits of the peanut ball in the birthing space.

Consider the pregnant pelvis; the bones of the inlet and outlet as well as the joints and ligaments that hold it in place and allow it to move and which have been limbered up under the influence of the pregnancy hormone relaxin to allow even more mobility during labour and birth. Another feature on that landscape are the hip joints, the junctions where the femurs (thigh bones) lock into the pelvis and they play a role in the movement of pelvic bones too. When legs are apart the pelvis is widened, conversely, when legs are together, the pelvis is narrower.

Learning how upright positions like standing, sitting, kneeling, and squatting along with movements like walking, rocking, jiggling, rotating and swaying the hips can enhance labour and birth is usually page one of Birth Prep 101. The aim being to create more space for the baby to move into, through and out of the pelvis as labour progresses – being upright and moving is the key.

But what if a woman is confined to the bed or simply feels like having a rest? The positions in this situation are likely to be prolonged sitting up, side lying, back lying, or semi-reclined. All of which inhibit the mobility of the pelvis by causing pressure on the pelvic bones (including the lower back and tail bone). This is when placing a peanut ball between the legs or under the knees can be helpful to facilitate pelvic widening and alignment that is helpful for labour. Side lying is the most effective of the stationary positions because it frees up the back and one side of the pelvis for unrestricted movement of the bones.

The progress of labour in stationary positions not only depends on having a peanut ball placed between or under the legs, but is also influenced by where the hips are in relation to the pelvis. The key by and large is to create 90 degrees flexion of the torso, hips and knees (mimicking all fours position) which puts the pelvis in a neutral position. With a sharper angle, the hips are located above the pelvis which maximises the pelvic outlet and  is useful mainly in the pushing phase of labour as baby descends the birth canal1.

Generally speaking however, labour’s progress in stationary positions is mostly helped by the neutral position of the pelvis with the aid of a peanut ball which allow the following techniques to be easily applied where necessary 1:

Internal rotation of the hips – closes front of the pelvis, increases space at the back

External Rotation of the hips – opens front of pelvis, decreases space at the back

So there’s a glimpse of how and why women can use a peanut ball during labour and birth to help optimise their baby’s movement into and through the pelvis if she needs to rest or is confined to the bed. Consider checking to ensure your place of birth offers peanut balls to include in your Labour and Birth Tool Kit and collaborate with your care givers on how best to use it for optimal effect if the need arises.