Today’s video is about the early introduction of the common allergenic foods. There’s lots of confusion about this topic and about how we should be introducing these foods.

The guideline around food allergies have changed over the last few years and we now know that early introduction of common allergenic foods is extremely important.

When we say ‘early introduction’ – we don’t mean that you introduce the food earlier than any other food, we just mean that the top 9 common allergenic foods should be introduced alongside everything else before the age of 12 months.

We know now, through clinical trials and studies, that this actually does help to reduce the rate of childhood food allergies. It is almost like prepping the immune system and letting it know “this is okay” by introducing it and keeping it in the diet.

An allergic reaction is an over-reaction of the immune system, when the body thinks something is an enemy, when it is not. That’s what causes the symptoms of an allergic reaction, which sometimes can be very severe.

The early introduction of common allergenic food guidelines state that children between the ages of 4 – 6 months, but never before 4 months (they need to be ready to eat, they need to be able to sit-up nicely, with good head control and be able to swallow), and before 12 months, we need to be introducing the top 9 allergenic foods – peanuts, tree nuts, sesame, soy, wheat, eggs, milk, fish and shellfish.

The top 9 common allergenic foods, as mentioned above, should be in bold on the back of any packet. These foods are responsible for approximately 80% of food allergies and that’s why they are the top 9!

A recent study called The LEAP Study, by Dr Gideon Lack, was done with British children and showed that with early peanut introduction (before the age of 1), there was an 81% drop in those children developing a peanut allergy, to children that were delayed from having peanuts until they were several years old.

The study clearly showed that the early introduction of common allergenic foods, in this specific study peanut, dramatically reduced the rate of children being diagnosed with peanut allergy.

We know that 1 in 10 children in Australia, under the age of 1, have a diagnosed food allergy and the rest of the world is not that far behind. Australia is however the worst country in the world for childhood food allergies and we don’t really know why.

If you have a child with a food allergy and you have been told to introduce other foods – there is a way to do this, through a structured approach, or if your child doesn’t have food allergies and you just want to introduce nuts and you’re not sure where to start, we’ll discuss this as well.

“WE KNOW THAT 1 IN 10 CHILDREN IN AUSTRALIA, UNDER THE AGE OF 1, HAS A DIAGNOSED FOOD ALLERGY AND THE REST OF THE WORLD IS NOT THAT FAR BEHIND. AUSTRALIA IS HOWEVER THE WORST COUNTRY IN THE WORLD FOR CHILDHOOD FOOD ALLERGIES AND WE DON’T REALLY KNOW WHY.”

With solid foods, we would suggest that you consider getting nut pastes, a good, pure quality peanut butter (not Nutella) or scrambled eggs or a wheat bread roll.

Start off with ⅛ of a teaspoon. If it is a young child, introduce them to the food after their morning nap when they are wide awake, when you should not expect them to be drowsy.  You can mix the food with something else or give it to them straight.

One of the most important things you need to know about introducing allergy foods is that once you introduce something, you have to keep it in the diet. We don’t want to expose the child to it, they may build up antibodies, and you don’t introduce it anymore, 6 months down the line you reintroduce it and the body thinks it is some kind of enemy.

It is all about consistent exposure, not about the amount.

I hope that’s been helpful for you today. If you want more from The Nest, then we’ve got lots of other resources for you. We’ve got our FREE Virtual First Aid Kit for all mums, dads and grandparents and anyone that looks after your child. It’s a PDF that you can download to your phone or computer, you can print it out and bind it. It’s got lots of different first aid situations in it, including choking and CPR. You can find it at the bottom of every page on our website.

We’ve also got ourAllergy & Anaphylaxis Masterclass for families living with childhood food allergy, register here and you will get immediate access! You also get Facebook group support for all your questions, which are answered by allergy nurses and a workbook as well.

Keep in touch and email us with any queries! 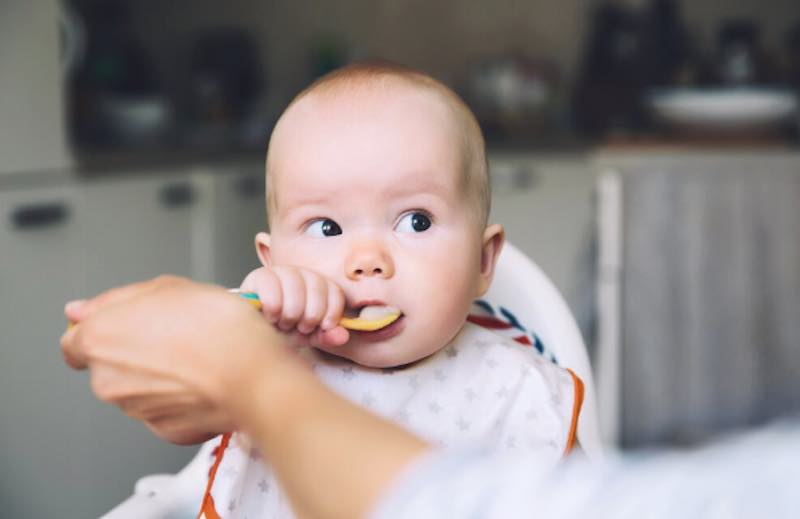 Calmbirth is continuing our care package with a 10% discount for all Zoom courses. If you are experiencing significant financial stress due to COVID-19, please contact the Educator you would like to book a course with to find out how they can assist you. CLICK HERE TO GET THE CARE PACKAGE DISCOUNT